Canberra's debatable reputation for being dead had no bearing on the decision to film Me and My Mates vs The Zombie Apocalypse in the territory, its producer Christian Doran insists.

But he admits it's a question the makers of what's been described as the first "oz-zom-com" get asked a lot. 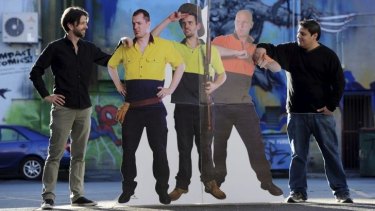 "But for us [Canberra] is just where we live and we think it's pretty and a great place to make film."

The feature, shot in Canberra early last year, will premiere in Sydney's Entertainment Quarter near Fox Studios on Friday, July 24 before a gala event at the Dendy in Civic on Saturday, July 25.

The tongue-in-cheek film stars comedians Jim Jefferies, Alex Williamson and Greg Fleet who play tradies stuck in a telephone exchange during the onset of the zombie apocalypse.

The trio team up with two young apprentices, Canberrans Andy Trieu and Matt Popp, to deal with a corrupt military, the spreading disease and a dwindling supply of beer.

And if any of the zombies look familiar it may be because they are Canberrans who "stayed up all night in horrible makeup" to work as extras on the film, Doran said.

The cinematic release marks the end of three-years of work for Doran, fellow producer Daniel Sanguineti and writer/director Declan Shrubb to get the low budget feature off the ground.

It begin with a grant from the ACT government's Screen Investment Fund through the industry-building ScreenACT's Low Budget Feature POD covering about 15 per cent of the film's cost.

Federal tax breaks covered about 40 per cent of the film's budget which came in just under $1million.

"It's one of the first films that's got a real budget and is completely Canberra made … crewed and shot in Canberra," Doran said.

"Why a lot of stuff isn't shot in Canberra is because they have to bring more experienced crews down from Sydney and that costs accommodation.

"By shooting here with a Canberra crew more often our capacity to make film… becomes easier."

The makers say the film is part of a new wave of "social films" using crowd funding to cover about 5 per cent of costs and social media to generate interest in the feature to ensure there was an audience ahead of its cinematic release.

To deal with the decline in independent film the makers turned to Tugg.com.au – an online platform which ensures there is an audience for films by allowing fans to request screenings at their nearest cinema.

"If 60 tickets are sold then the screening will go ahead," Doran said.

"We've got explosions and zombies getting their heads cut off, it's a real cinematic event."

After its Australian release the makers are hoping for worldwide distribution, it's already been accepted for the Sitges Fantastic Film Festival in Spain.

The trio then hope to secure more support through ScreenACT's Accelerator POD to make their next Canberra feature as soon as they agree on a final idea.

The film will be released on DVD, and video on demand, in September.

Me and My Mates vs the Zombies opens on Saturday, July 26, at Dendy. It also screens on August 12 at Limelight Tuggeranong and August 19 at Dendy.

Become a premium member and support our content creation!